Saturday, April 25th, I celebrated my 23rd birthday. It was definitely a day of excitement! Here are a few stories and pictures from the day.

I woke up early, full of anticipation and excitement, and before doing anything else, I opened my packages from my family and my college roommate, and then the cards I had gotten so far. Pretty soon Lena knocked on my door and told me to get dressed because we were going out for breakfast. After I opened up my gift from her, the two of us joined our neighbors Mack and Donna for breakfast at the Original Pancake House. I had yummy chocolate chip pancakes, and we had fun laughing over our meal.
Just as we were arriving home, a man drove up and dropped off a lovely bouquet from my family!

Then Kent and Erika came to take me out to lunch. We ate at a Texas steakhouse called Texas Land and Cattle. It was quite good, and they even brought out a brownie for my birthday. After the meal, Kent dropped us off at the theater, and Erika and I watched “17 Again”. It was nice to share the movie with her! 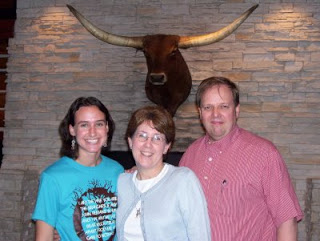 Saturday evening was a party for Lena’s Sunday school class. They normally go out to eat once a month, and this month they were having a salad supper at someone’s home. They also surprised me with a birthday cake, sang “Happy Birthday”, and gave me a huge card that everyone had signed. We played a game where everyone had written down a little-known fact about themselves, and the rest of the group had to guess. It was a fun night of visiting with people. I was amazed at the love that was shown to me on my birthday, and I’m so thankful for special friends and family in Texas and in the Midwest!