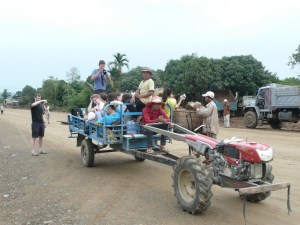 Today we started VBS in Ou Thmaa (pronounced oo t-ma). It’s a village east of Sompavloun where the church here has been working. We didn’t go to breakfast but had granola bars and french bread. The plan originally was to take tuk tuks and motos but then the drivers doubled the price they had originally quoted so Sophan hired a cart type thing to take all of us and our things. It was crowded and bumpy and I didn’t have the best attitude, but the scenery was beautiful- the mountains and fields. We passed a few houses along the way and there were various modes of transportation. It took longer than we had planned so we arrived and got started a bit late.

The kids definitely aren’t used to seeing foreigners so they didn’t swarm around us and give us hugs and hold our hands. We met in the school, which was a 3-sided lean-to with a thatch room and wood floor a couple of feet above the ground. Lots of parents came and sat around the edge. Gayle said at first the parents were very cautious and didn’t trust those who came from Kilometer 13 with their “foreign” religion. Yet even though Buddhism is the main religion in Cambodia, its basically in name only. While they are very aware of the spiritual realm, they saw that Buddhism did nothing for them during the Khmer Rouge years and many of the wats were destroyed. Many in Cambodia are searching and wondering and so believers have many opportunities to share about Christ.

I’m not sure if its the emotions of the trip but I’m feeling a bigger tug toward Cambodia, particularly the rural areas. Perhaps even Western Cambodia, but I don’t know. I have felt so at home here this week. I don’t know if being with people who speak my language all the time and having some comforts distorts that, but I know I have more of a burden for these people to know Jesus and for each aspect of their lives to be transformed.

We actually broke down on the way back so we had to walk about 30 minutes and then got motos the rest of the way. Everyone was so sleepy at lunch! I haven’t felt like I have gotten good rest even though we’ve been going to bed at a decent time.

I wasn’t sure how English would go since I was so tired and we skipped yesterday but it went really well! Paula and I had YoLa and Dee. Thankfully Pastor Sophan was there to translate but Dee also had a Khmer-English dictionary which helped too. They enjoyed when we talked about emotions and opposites.

Gayle told us the story of Khru Map, the teacher in Ou Thmaa. He isn’t a believer but he has had a dream about Jesus several times. He told Sophan that he wasn’t even looking for God, and Sophan said, “God is looking for you”. He would open a lot of doors I think if he became a Christian.

View all posts by shilkemann